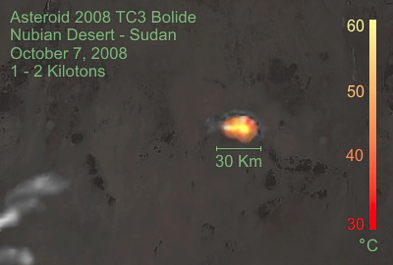 Asteroids are naturally occurring space borne objects ranging in size from grains of sand up to several hundred kilometers in width. The largest is named Ceres and it has a diameter of 930 km ( 580 miles ). About 200 asteroids have diameters larger than 97 km ( 60 miles ) and are sometimes referred to as minor planets. However the total mass of all asteroids in our solar system is much less than that of Earth's Moon. Larger asteroids are roughly spherical while those with diameters less than 160 km are usually elongated or irregular.

Most asteroids are located in orbit between Mars and Jupiter, but more than 200 intersect Earth’s orbit and there may be as many as 1,500 that could cause a global catastrophe if they collided with Earth. However the chances of such a collision average out to only one every 300,000 years. Most asteroids, regardless of size, rotate on their axes every 5 to 20 hours. Some asteroids are binary ( possessing smaller satellites of their own). A peculiar asteroid about 60 meters in diameter and dubbed 2002 AA29 was discovered during 2002 in an orbit roughly the same as that of the Earth. Over a period of centuries it overtakes Earth, but then slows down causing it to drop behind again.

On October 6 2008, an asteroid about four meters in diameter named 2008 TC3 was sighted by NASA's automated Catalina Sky Survey telescope at Mount Lemmon, Arizona. Computations predicted it would enter Earth's atmosphere at 2:45:28 UTC on October 7, 2008 over the Nubian Desert of northern Sudan, Africa. At 02:45:47 UTC it entered the Earth's atmosphere at a velocity of 12.8 kilometers per second and exploded about 37 kilometers above the surface releasing an energy between 1 and 2 kilotons. The flash lit up an area about 900 square kilometers and was captured by Meteosat 8, a geosynchronous weather sattelite. Meteors of this size occur about 3 times a year. However this was the first time in history that an asteroid was detected in time for an impact alert to be issued.

About a year earlier, on Oct. 11, 2007 another asteroid ( 2007 TU24 ) was discovered by Catalina and estimated to be up to 2,000 feet ( 610 meters ) in diameter. Fortunately It missed Earth by 334,000 miles ( 537,500 kilometers ). This is a very near miss in terms of astronomical distances. If it had hit the Earth, it would have released about 1,500 megatons of energy and forged a crater nearly 5 kilometers ( 3 miles ) wide. This would be larger than than the Barringer Meteorite Crater near Winslow Arizona. Or if it had hit in the ocean, it would have created a devastating tsunami of theatrical proportions. Detection of hazardous near Earth objects is part of a cooperative effort generically referred to as Spaceguard.