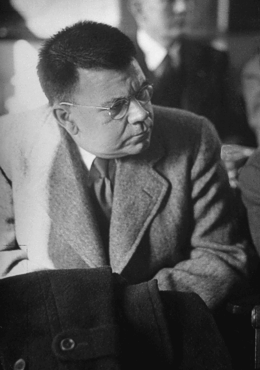 The Condon Committee was a group of academics from the University of Colorado who were commissioned during the late 1960s by the AFOSR for the purpose of clarifying the UFO phenomenon. The committee was directed by Edward U. Condon ( Photo ), a prominent and experienced physicist. The committee was composed of one journalist, one film producer, one computer programmer, one chemist, one behavioral scientist, one philosopher, one psychiatrist, two astronomers, three engineers, five meteorologists, six psychologists, seven physicists and several literary and administrative support staff. In 1968 the project was granted $313,300 to cover a 15 month period.

The complete evaluation process took about 18 months, cost about $500,000 and recommended against the continued study of UFOs. Critics of the Condon Committee have found important flaws in the study. The most significant flaws include the choice of inferior quality cases upon which to base the study and an intense bias in favor of human and mechanical frailty as explanations for UFOs. The study itself is well documented in the book Scientific Study Of Unidentified Flying Objects, published by the New York Times Company. This book is an excellent collection of scientific explanations for the possible causes of misperceptions, misidentifications, hoaxes and anything else that could be used to debunk UFO sighting reports.

The Condon Committee did not attempt to provide an explanation for UFOs of alien origin. Because of this, the findings of the committee, generically referred to as the Condon Report hurt the pursuit of ufology by reinforcing its image as unworthy of scientific attention. It also further entrenched academic elitism by relegating anyone who still believed in UFOs to the ranks of the intellectually challenged. Remnants of this stigmatization remain today, but worse still, it has become the enemy from within. It used to be that scientists were given the spotlight when debunking UFOs because they were assumed to know what they were talking about. To counter public perception, UFO interest groups began enlisting their own academics in an effort to legitimize ufology. However the truth is that scientists on both sides of the issue don't understand how alien UFOs work or where they come from. UFOs have remained so inaccessible and beyond our technology that by comparison, our scientists are like cavemen trying to figure out a space shuttle. Therefore the only practical use for academic credentials in ufology is in politicking. Consequently, although ufologists are better equipped to see the bigger picture, they have become marginalized on one side by technocracy and on the other by internal politics.

Somewhat ironically, scientists have also found themselves used as political pawns and the Condon Committee appears to have been played in such a manner. There is no question that Dr. Condon was a top-rate physicist. The problem was that he was a self-proclaimed agnostic with respect to UFOs. Proponents of the Condon report interpret Condon's agnosticism as being unbiased, however it is well known that he was irked by astrobiologist Carl Sagan's view on UFOs which Condon felt was too soft. He even went so far as to consider banning Sagan from the prestigious Cosmos Club. Condon was also chosen over people with much more experience, including Dr. J. Allen Hynek, because Northwestern and most other universities alledgedly did not want to become embroiled in the UFO controversy. Condon also had no familiarity with actual case studies and had never performed any UFO investigations. Other than lending his reputation to the project, Condon also had little direct involvement. Today we know that he never familiarized himself with the best cases and that he had not in even read the final report before writing his Conclusions and Recommendations.

The USAF also wanted to rid itself of the responsibility for investigating UFOs and explaining them to the public. Hynek, who was their primary scientific consultant was polar opposite to that agenda and had already been exploited by the USAF in an attempt to quell public noise over the 1966 Michigan UFO flap. Following that fiasco, Hynek said it was the last time he was going to "pull a chestnut out of the fire for the Air Force". The last thing the USAF wanted was their own scientist contradicting their policies. The only thing they could do was get other scientists to discredit the UFO phenomenon and reccommend against further USAF involvement, thereby providing an excuse to remove Hynek and close Project Blue Book. Condon fit the profile and his report gave the USAF exactly what they wanted. Subsequently, Project Blue Book was terminated on December 17, 1969.