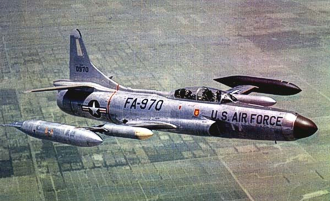 The F-94B remained in USAF service through 1954 before being transferred to the Air National Guard. In ANG service, some were modified with a pod under each wing for two additional .50 in (12.7 mm) machine guns, bringing the total guns to eight. In the F-94C version, the guns were replaced by rockets. Although the nose-mounted rockets were a cool idea, they blinded the crew with their smoke and fire, and in some cases their exhaust could cause a flameout of the jet engine, leading to the loss of the aircraft. To solve this problem, mid- wing fuel and rocket pods were added, each holding 12 rockets. This version of the aircraft was extensively used within the Semi-Automatic Ground Environment (SAGE) air defense system.

During a Secret a UFO Briefing in 1952, The Commanding Officer of the 34th Air Defense Division in Albuquerque Colonel Methaney, presented a plan that called for a special squadron of stripped down F-94C’s with gun cameras to intercept and film UFOs. Methaney was firmly convinced that the UFO’s were real and that they were interplanetary space ships. The squadrons were to be located at places in the United States where UFOs were most frequently seen. The plan went through Western Air Defense Headquarters and to Air Defense Command Headquarters. After considerable study and debate, it was decided that it would not have been effective to use fewer than twelve aircraft, and their weren't that many available.1

On the night of December 10, 1952, near the Hanford nuclear plant in Washington state, the pilot and radar observer of a patrolling F-94 spotted a light while flying at 26,000 feet. The crew called their ground control station and were told that no planes were known to be in the area. They closed on the object and saw a large, round, white UFO with a dim reddish light coming from two windows. They lost visual contact, but got a radar lock-on. Each time they attempted to close on the UFO it would reverse direction and dive away. Several times the F94 had to take evasive action because collision seemed imminent.2

Between 8:15PM and 10:30PM on Saturday July 26, 1952, Air Route Traffic Control ( ARTC ) radar operators at Washington National Airport picked up several unidentified slow moving targets. They were spread out in an arc around Washington from Herndon, Virginia 20 miles North-east, to Andrews AFB about 10 miles east, where they were also being tracked on their radar. At 11:30PM jet interceptors were requested, and by midnight two F-94s from New Castle County AFB about 100 miles north-east were airborne. Just as the two jets arrived in the area the targets disappeared from the radarscopes. The two jets made a systematic search of the area, but couldn't make a visual or radar contact so they returned to their base.

Meanwhile Langley Tower, about 140 miles south began to get reports of weird bright rotating lights of alternating color in the area around Langley AFB near Newport News. The tower operators visually confirmed the sighting and called for an interceptor. An F-94 in the area was visually vectored toward the UFO by the tower operators. The pilot saw the UFO and started toward it when the UFO dimmed and the pilot lost visual contact. The F-94 continued its run and established a radar lock-on, but it was broken in a few seconds as the UFO sped away.

The UFOs then reappeared back on the Washington National Airport radarscopes and two more F-94's from New Castle AFB were ordered to the area. When the jets were vectored toward the UFOs, Lieutenant William Patterson, a veteran of the Korean War, found his F-94 surrounded by a ring of bluish-white lights. Patterson radioed for instructions and was not given permission to fire on the UFOs. The UFOS then went into evasive maneuvers, instantly accelerating away beyond range. ARTC vectored Patterson toward another UFO and he made visual contact. He cut in the F-94's afterburner and went after it, but it outdistanced the interceptor and disappeared. After patrolling the area for about twenty minutes, the jets began to run low on fuel and returned to base. Minutes later it began to get light, and by the time the sun came up all the targets were gone.3 Below is a reproduction of a July 1952 memo by Gilbert Levy, Chief USAF Counter Intelligence Division, which mentions the F-94 intercept. 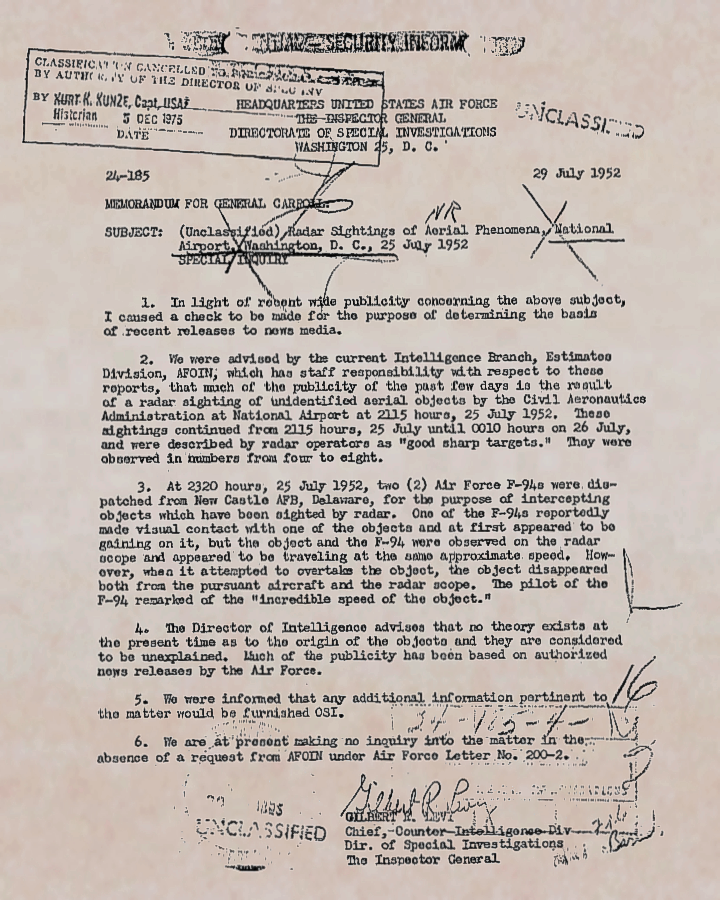 On the night of July 26, 1952 ( same night as the Washington sighting ), An ADC ( Air Defense Command ) radar picked up an unidentified target in California. No specifics are given for the location, but it was probably Hamilton Air Force Base situated along the western shore of San Pablo Bay, south of Novato, California. This was ADC's primary base of operations in California at the time. An F-94C was scrambled and vectored to the target. The radar operator in the F-94 locked onto the UFO and the pilot and radar operator both confirmed visual contact. They were headed directly toward a large, yellow-orange light. Both the radar on the ground and the radar in the F-94 showed that as soon as the F-94 was nearing gunnery range of the UFO, it would suddenly pull away at a terrific speed, only to slow down enough to let the F-94 catch it again. The pilot told official Air Force UFO investigator Edward J. Ruppelt that they felt as if this were just a big aerial cat-and-mouse game — and they didn't like it — at any moment they thought the cat might have pounced.4