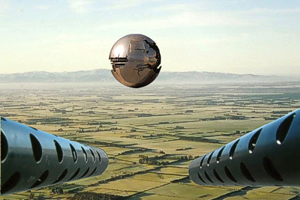 In ufology the phrase "foo fighter" originated near the end of World War II when pilots in Europe and Japan began reporting that small flying spheres or disks of unknown origin would briefly escort their aircraft during missions. Most encounters were at night, but there were also some daylight reports of small solid metallic spheres and discs.

During 1943 a tail gunner on a mission over central Germany reported that an odd shaped gold sphere about the size of a basketball approached his B-17 from the rear and moved slowly over the airplane's wings before rapidly departing toward the aft. The artist's rendering ( upper left ) is from the tail gunner's position.

Around 4:00AM on May 3, 1945 a B-24 spotted two foo-fighters at 11,000 feet between Micronesia and Guam. Each morphed in color from red to orange to white and back to red in a repeating sequence. They took up positions around 2000 yards off each wing and shadowed the B-24 through all types of evasive action. After about an hour, one of the foo-fighters dropped away. The remaining foo-fighter never approached closer than 1000 yards and would speed up when the B-24 went through the clouds, emerging on the other side ahead of the aircraft. Around 7:00AM there was enough daylight to see that the object was bright silver in color. As the B-24 approached for a landing at Guam, the foo-fighter changed course and rose to about 20,000 feet. The aircraft crew also observed eight bursts of intense light green flame, one of which hung in at about 5000 feet. 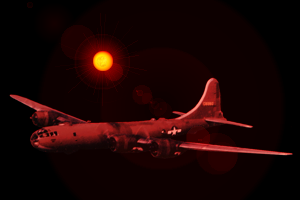 During August 0f 1944, the pilot and crew of a B-29 flying a night mission over Sumatra reported that an intensely colored reddish orange sphere about 5 feet in diameter suddenly began pacing their plane. The pilot took evasive maneuvers, but the foo-fighter stayed with the B-29 for about 8 minutes before suddenly ascending out of sight into the clouds above ( artist's rendering left ).

On June 21, 1952, at 10:58PM, a Ground Observer Corps spotter reported that a slow moving craft was nearing the Atomic Energy Commission's Oak Ridge Laboratory, an area where unauthorized aircraft were prohibited from flying near. The spotter called the sighting into his filter center and they relayed the message to the ground control intercept radar. They confirmed the target, but it was weak and quickly faded from the radarscope. An F-47 aircraft on combat air patrol in the area was vectored in visually, spotted the light, and closed on it. They engaged in aggressive maneuvers at altitudes ranging from 10,000 to 27,000 feet. Several times the object made what seemed to be ramming attacks. The light was described as white, 6 to 8 inches in diameter, and blinking until it put on power. The pilot could see no silhouette around the light. The small size of this foo-fighter likely accounts for the weak radar return.

On Sunday July 27, 1952, Washinton National Airport radarscopes picked up several UFOs and two F-94 Starfires New Castle AFB were ordered to the area. When the jets were vectored toward the UFOs, Lieutenant William Patterson, a veteran of the Koren War, found his F-94 surrounded by a ring of bluish-white lights. He was not given permission to fire on them and they soon went into evasive maneuvers, instantly accelerating away beyond range. ARTC vectored Patterson toward another UFO and he made visual contact. He cut in the F-94's afterburner and tried to pursue, but the object easily outdistanced the interceptor and disappeared.

Prior to the end of World War II it was not known that foo-fighters were not devices made by the opposing sides and to this day no evidence has been disclosed that indicates where these objects originate. Rarely larger than a few feet across, their performance characteristics suggest that they are far in advance of terrestrial technology. For example, their typical behavior was to suddenly appear alongside of, or slightly in front of an airplane and closely track it on a parallel course, then depart by instantly accelerating away, often straight up at incredible speed.

Similar objects were also reported during the Viet Nam and Korean Wars where they were sometimes tracked on RADAR. Because they had never been hostile, they were not considered a threat. Natural explanations include St. Elmo's Fire and ball lightning. However natural explanations do not explain all foo-fighters, particularly those of metallic composition. 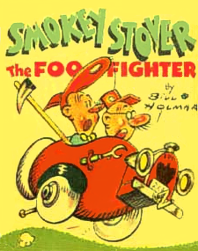 The phrase is derived from early references to the objects by American pilots as "fireball fighters", which was shortened to "fire fighters" then linked by word association to the American cartoon character Smokey Stover the Foo Fighter, a popular comic ( issue circa 1938 pictured left ) about the adventures of two firefighters and their foo mobile. In the comic, the term foo is a slang derivative of the French word "feu" meaning fire.

One of the earliest print references to foo-fighters appeared in the January 2, 1945 edition of the New York Times where it was reported that, "Balls Of Light Stalk U.S. Fighters In Night Assaults Over Germany", and the article went on to say, "The Germans have thrown something new into the night skies over Germany ... the weird mysterious foo-fighter, balls of fire that race alongside the wings of American Beaufighters flying intruder missions over the Reich." A number of World War 2 aircraft were also emblazoned with the Smokey Stover logo and foo mobile, including a 40th Bomb Group B-29 Superfortress from the 25th Sqadron. A B-17 Flying Fortress from the 414th Bomb Squadron also carried the Smokey Stover name and foo mobile. It saw plenty of action and although its engines were hit by bullets and flak several times, they never ceased functioning and weren't changed from the time the bomber left the USA until it had completed 50 missions.

Also loosely linked by its pronunciation to the term foo-fighter is the acronym FUBAR, pronounced foo-bar and meaning "fouled up beyond all repair". Like the phrase foo-fighter, FUBAR is also a military expression from World War II. Given these variables, the term "foo" became a popular euphemism and it found its way into a number of other comics and onto customized license plates. By the 1960s, the use of the phrase foo-fighters trailed off significantly, usually replaced by the term UFO. 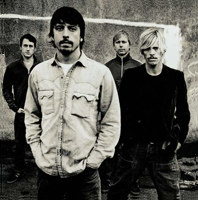 During 1994 an alternative rock band brought foo-fighters into pop-culture by naming their band after the mysterious machines. In an interview with authors Jon Wiederhorn & Kurt Loder, the founding band member Dave Grohl recalled, "I used to have freaky dreams about UFOs. When I was a kid I really wanted to see one, so I would just lie in my front yard and go, 'Take me, I'm here. Can you hear me?' In 5th or 6th grade I found out about Project Blue Book, so I got really into being an investigative UFO expert. I'd go around to friends' houses and see dead grass be like, 'See, that's definitely an indication of some sort of life form landing in your backyard.' I have seen some weird stuff, actually. On a Foo Fighters tour when we were driving through Arizona we saw what looked like weird little explosions going in a circle moving through the sky."