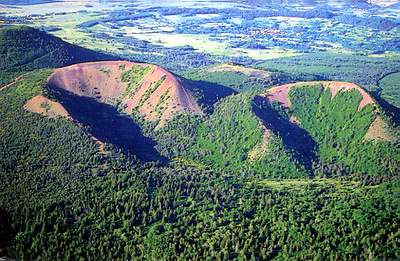 Puy De Lassolas
Puy De Lassolas is the name of an extinct volcano with a breached caldera in The Puys chain of volcanoes located in the Regional Nature Park of the Volcanoes of Auvergne France.

The chain which formed over time between 95,000 and 10,000 years ago includes eighty volcanoes spread over 35 km and is a popular tourist getaway. The Puy De Lassolas is pictured in the upper part of the picture on the left.

In ufology, Puy De Lassolas is the location where the Raėlian Movement began following an alleged contact between an alien and the French sports journalist Claude Vorilhon.