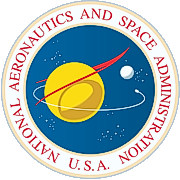 NASA
Acronym for National Aeronautics & Space Administration. NASA was founded during 1958 in the USA. It replaced the NACA and amalgamated the remaining aerospace organizations into a single government agency. The ensuing "space race" between the United States and the USSR propelled NASA to the forefront of space exploration, culminating on July 20, 1969 with the landing of Apollo 11 on the Moon.

NASA is an agency of the United States government responsible for developing space exploration and research initiatives, as well as coordinating various communications related projects. NASA is also responsible for administering the space shuttle program and participating in the improvement of aerospace technology, increasing international alliances for space activities, and establishing partnerships between private companies and government agencies in the aerospace industry. The US president is mainly responsible for determining NASA’s budget, which directly affects the mission and goals of the agency. The five main branches of NASA include:

NASA employs thousands of scientists, engineers, and technicians at its major installations across the country. These facilities include:

Many ufologists believe that NASA knows much more about UFOs than it discloses to the general public. Apollo astronaut Edgar Mitchell, who spent much of his youth in the vicinity of Rosswell New Mexico, is among those who believe that Earth has been, and probably still is being visited by aliens.