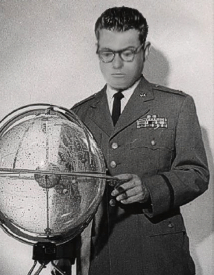 Hector Quintanilla was the USAF officer who succeeded Lieutenant Colonel Robert Friend as head of Project Blue Book between 1963 and 1969.

Quintanilla believed his efforts would lead to a scientific explanation of the UFO mystery. He also felt that the Socorro New Mexico UFO sighting by Lonnie Zamora was Project Blue Book’s most important case. He felt it was possible, if not likely, that the Socorro craft was a secret craft based on the design of the Lunar Excursion Module ( LEM ), but Quintanilla never found any evidence for that theory.

Quintanilla also claimed he had the fullest cooperation from high level agencies and that there was no conspiracy to suppress UFO reports. However today we also know that in accordance with military regulations, the best reports bypassed Project Blue Book altogether.

It is difficult to believe that Quintanilla ( a USAF Lieutenant Colonel ) was unaware of those regulations, especially when he was directly involved in official UFO investigations. The only logical explanation is that he was compelled by higher orders not to disclose such information.