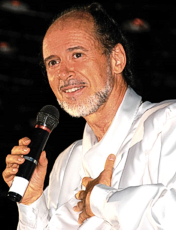 Claude Vorilhon was born on September 30, 1946 in Vichy France. During his twenties he was involved in auto racing and sports journalism. He also married and had two children; a daughter named Aurore ( 1972 ) and a son Ramuel ( 1974 ). In 1973 he claims to have been contacted by an alien who gave him the name Raël and instructed him to spread revised biblical information.

To carry out his mission, Vorhillon founded the Raëlian Movement. On October 7,1975, he claims to have been taken by the aliens to their planet where he was introduced to significant historical religious figures including Jesus, Buddha, Joseph Smith and Confucius. Vorilhon moved from France to Quebec Canada during 1992 where he built a UFO theme park near Montreal known as UFOland. It is used for retreat style seminars.

The Notable Names Database listed Vorhillon's occupation as "Hoaxer, Religion". According to an article on the rickross.com website, Vorhillon's first wife Marie-Paul now sees herself and children as victims of brainwashing. She goes on to describe Vorhillon as an egotist who uses Raëlism as a lure for sex and attention. She left Vorhillon in 1985 and returned to nursing, but it wasn't until 2001 that she says her children "finally saw reason and managed to get out". Since then, Vorhillon ( Raël ) has spent time traveling, meeting with followers, and playing race car video games. Vorhillon's contactee and religious claims are not taken seriously by most ufologists, scientists or theologians.