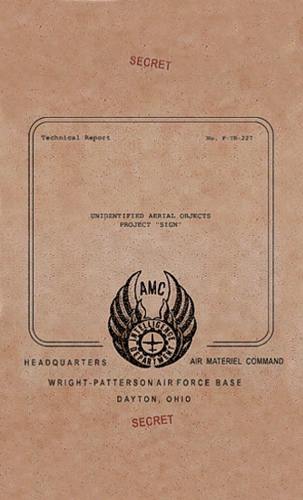 Project Sign was carried out between January 22, 1948 and February 11, 1949 by the Technical Intelligence Division, Air Materiel Command. It was the first known and officially recognized USAF investigation into what were then known as flying saucers.

Dawn Of The Modern Era

During June of 1947, civilian and military pilots began reporting strange objects flying over the continental United States. The most widely publicized sighting came from civilian pilot and businessman Kenneth Arnold who had seen nine bright saucer-like objects near Mount Rainier, Washington on June 24. Following the release of Arnold's sighting, many more reports started pouring in. The media, renowned for conjuring up catch phrases soon began referring to the objects as flying saucers or flying disks. The reports were gathered by the Collections Branch of the Air Force Office of Intelligence Requirements (AFOIR-CO) and analysis was carried out in concert with the Air Force Directorate of Intelligence (AFOIN), Air Materiel Command (AMC), and Special Agent S.W. Reynolds of the FBI.

By the end of July, Colonel Garrett at AFOIR-CO and Special Agent Reynolds became curious as to why the Air Force hierarchy wasn't paying much attention to their efforts. They began to speculate that other departments above them that had already come up with the answers, and to explore this theory Garrett drafted a Preliminary Estimate of the flying disk situation. In the July 30, 1947 document, he reports that some flying saucers are metallic objects about the size of a C­54 aircraft, but circular in shape with a domed upper surface. He also writes, "Lack of topside inquiries, when compared to the prompt and demanding inquiries that have originated topside upon former events, give more than ordinary weight to the possibility that this is a domestic project, about which the President, etc. know."1

The lack of "topside inquiries" Garrett referred to in his Preliminary Estimate has been dubbed "the silence from topside", and the "former events" he mentioned began in 1946 when substantial attention had been focused on reports of unidentified rocket-like objects reported over Sweden, Finland and other European nations. The objects have since come to be called Ghost Rockets because nobody knows for sure what they were or where they came from. Some ghost rockets exhibited maneuverability inconsistent with the technology of the time and bore a striking resemblance to sightings that were taking place over the United States.2

Garrett and Reynolds must also have had more than a hunch that they weren't being told everything that was going on. On July 08, 1947, Roswell Army Air Field had issued a press release stating that they had recovered a flying disc from a ranch near Roswell, New Mexico and that it had been "loaned to higher headquarters". The story made international news and simply could not have been overlooked by the very people in the Air Force who were investigating flying disks. Furthermore, the wreckage was taken to Air Materiel Command at Wright Patterson Air Force Base, which is where foreign aircraft were studied and reverse engineered. Therefore it would have been the logical location for a "domestic project" concerning the recovered disk from Roswell. Garrett and Reynolds figured that by sending the Preliminary Estimate up their respective chains of command something would shake out. They were wrong.

If anyone topside knew anything, they weren't telling. One might be tempted to think that because Garrett had been working with AMC, he should have simply been able to drop by and investigate in person, but this was not the case. The AFOIR-CO was located at the Pentagon while AMC was located 385 miles north-east at Wright Patterson AFB. Both locations have always had strict protocols. People can't just come and go when they please or check out Top Secret labs when they feel like it. Add to this the absence of any file on the Roswell case and the silence from topside seems a little more than coincidental. If the Roswell incident had been just a weather balloon, the report would have come across the desk at AFOIR-CO and been added to the list of solved cases. Instead, we find nothing. Volumes have since been written about the Roswell incident, and the more that one delves into it, the more that Garrett and Reynolds appear to have been correct. They were indeed out of the loop and were about to be taken out even further.

Around the same date as Garrett completed his Estimate, Brigadier General George Schulgen of AFOIN ordered the Director of Intelligence at Air Materiel Command, Colonel Howard M. McCoy to send investigators to Harmon Field, Newfoundland, where on July 10, civilians working at the base had seen a disk shaped object slice its way through the cloud layer leaving a visible trail in its wake. Meanwhile, Garrett's Preliminary Estimate was making rounds and by late August had been received by Commanding General of AMC, General Nathan Twining, who in-turn distributed it to those under him who would know if the saucers were part of any military program. Recipients included:

On September 5, 1947 a meeting was held at the Pentagon between Garrett, McCoy, Alfred C. Loedding and Dr. Charles Carroll. Following this meeting the flying disk case files were transferred from AFOIR to AMC. Garrett's team was effectively isolated from the action, essentially acting as the mail room for incoming sighting reports. This became even more apparent during the next two weeks when Colonel McCoy and those on Twinnings distribution list ( above ) held a conference on the flying disks. None of the AFOIR staff appear to have been included, and the results from the conference did not reveal any knowledge of a domestic flying disk project, or make any mention of the Roswell incident. By now the FBI had also returned negative findings.

Although no solution to the flying disk phenomenon had materialized, McCoy reported that they are real objects. He also suggested that they could be foriegn aircraft based on the Horten Wing, a jet powered flying wing designed by the Horten bothers in Germany during World War Two. The Horton IX V2 was strikingly similar to the artist's renderings of the objects seen during the Kenneth Arnold sighting. The possibility that the United States was being overflown by these or any other unidentified aircraft justified further monitoring and study. These conclusions were reported to General Twining, and on September 23, 1947 Twining put them into a secret letter and sent it to Brig. Gen. Schulgen. This would later become known in ufology as the famous Twining Memo.

Meanwhile AMC and AFOIR weren't the only ones who had become interested in flying disks. During 1947, General Curtis LeMay was briefly transferred to The Pentagon as Deputy Chief of Air Staff for Research & Development. Early in December he requested an update on the flying-disks and by December 18 yet another Estimate had been prepared. It was drafted by the Chief of the Air Force Office of Air Intelligence (AFOAI) Colonel J. F. Olive and Lt. Col. J. E. Thomas of the Offensive Air section (AFOAI-OA). Their Estimate concurred with Garrett's and McCoy's and was forwarded to the Chief of Air Force Intelligence, the Chief of AFOIR-CO, and the new chief of AFOIR General Charles Cabell. On December 30, 1947 Laurence C. Craigie ( LeMay's successor ) gave General Twining at AMC the go-ahead to establish Project Sign. It was assigned priority 2A, with a security classification of " Restricted" and the project number XS-304. It was carried out by the Technical Intelligence Division, Air Materiel Command between January 22, 1948 and February 11, 1949 under the direction of Captain Robert R. Sneider. Staff members included:

During the course of investigations it became apparent that unless reliable witnesses including experienced pilots were going mad or lying, there were real craft flying around that were well beyond the technical capability of any nation on Earth. The logical inference was that if the unidentified aerial objects weren't made on Earth, then they must be extraterrestrial in origin. In early August of 1948, Project Sign issued a Top Secret Estimate Of The Situation concluding that flying saucers are probably interplanetary spacecraft. We know this because USAF Captain Edward J. Ruppelt who had been in command of Project Blue Book, saw the physical documentation.3

As the Estimate worked its way up through channels, it had the effect of cementing opinion one way or another regarding the ETH. There were those who felt it was time to recognize the obvious, and others who simply refused. One of those in this latter group was General Hoyt Vandenberg who cited a lack of physical evidence as a primary reason for rejecting the Estimate. Coincidentally or otherwise, and perhaps somewhat ironically, it was also Vandenberg who stepped in to quell the media frenzy over the crashed disk at Roswell. Vandenberg's name would also surface again nearly 40 years later in connection with the controversial MJ-12 documents. As a result of Vandenberg's stance, the original findings in support of the ETH were suppressed and ordered destroyed. A revised Estimate was also ordered that was not allowed to advocate the ETH. These events make it clear that the hierarchy had already decided what the outcome of Project Sign would be.

No proof of Vandenberg's agenda has yet emerged, but circumstantial evidence points to three contributing factors. The most obvious is that the physical evidence recovered from the Roswell incident was never turned over to Project Sign. Therefore it must have been sent to a classified civillian agency or a secret military division above Project Sign, in which case, endorsing Sign's conclusions may have led to security problems. The second issue is that the USAF was facing a serious funding shortage. By suggesting that the flying disks were Soviet weapons, the saucer issue could be spun into a need for maintaining a balance of power with the USSR, thereby requiring considerable funding and upgrades for the USAF. Lastly, the Vandenberg's were communicants of the Episcopal Church. Religion in the Air Force has a history of divisiveness and it wasn't until the late 20th century that the possibility of alien life gained wider acceptance in mainstream religion. Any one of these personal, financial or security related concerns would have been sufficient for some people to reject the ETH, and any of them combined would have tipped the scales heavily against it.

Needless to say, the Project Sign team wasn't very happy and they tried to convince Vandenberg to reconsider his position. Unfortunately the rift was already too wide. Soon afterward most of those who had worked on the project were reassigned, and on December 16, 1948, the project name was changed to Project Grudge. 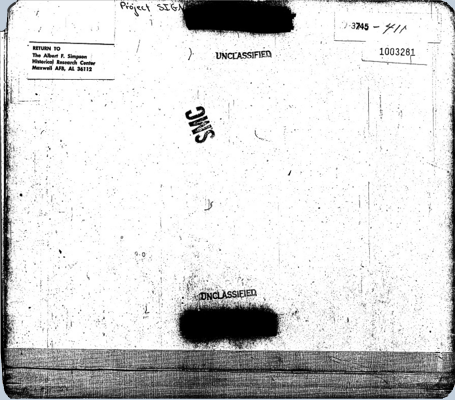