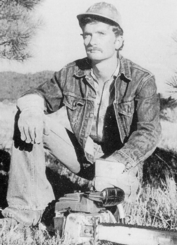 Travis Walton was born on April 23, 1957. He claims to be the victim of an alien abduction that took place on November 5th, 1975, in the Apache-Sitgreaves National Forest of Arizona, USA.

In 1978, Walton published The Walton Experience, in which he outlined his abduction experience. In 1993, Walton’s book was adapted into a film, titled Fire in the Sky, directed by Robert Lieberman and starring D. B. Sweeney as Travis Walton and Robert Patrick as Mike Rogers. The film dramatizes Walton's story in a sensationalist and fictionalized manner.

Debunkers have uncovered serious credibility flaws in Walton and his story. Although he did pass two polygraph tests, it was discovered that there was a previous test from which the polygraph examiner concluded Walton was attempting to perpetrate a hoax. It was also discovered that the questions used in the later tests had to be approved by Walton before the tests were administered.

An investigation by Ground Saucer Watch in cooperation with CUFOS also concluded that there was no corroborating evidence that Walton had boarded a UFO, only that members of his crew claim to have seen a bright light from a UFO knock Walton off his feet and throw him a short distance through the air. They watched as Walton hit the ground on his back, but instead of trying to help him, the crew panicked and sped off, abandoning Walton in the middle of the forest.

A subsequent search of the scene by officials turned up no evidence of a disturbance or anything that showed Walton had actually been there or that anything unusual had happened. When Walton reappeared several days later he showed no signs of injury and follow-up tests showed no medical signs of starvation or having been subjected to anything unusual.

Other circumstances that cast doubt on the story are that according to a local official, the Walton family had a history of interest in UFOs stemming from several sightings, including one in 1964 by Duane Walton ( Travis's brother ), and that Travis had unsuccessfully tried to gain media exposure in order to highlight the experiences.

Walton's desire to gain media exposure isn't all that damaging in and of itself, but It was also discovered that in May of 1971, Walton had plead guilty to stealing payroll cheques and forging signatures in order to cash them. So the picture suddenly becomes one of an admitted fraud trying to gain UFO related media exposure who then just happens to go missing, only to resurface claiming to be a victim of alien abduction.

Given the circumstances above it is natural to suspect a hoax, but there is even more. Walton and the crew stood to gain up to $100,000 for submitting their story to the National Enquirer. The Enquirer only paid them out $5000, but the movie, Fire In The Sky, went on to gross $19,885,552 in ticket sales during its 4 week run in theatres. Then in 1994 a VHS home video version was released, and in 2004 a DVD version was released.

Another highlight in the Walton story happened in 2009 when he appeared on the television game show Moment of Truth in which he was asked, "Were you abducted by a UFO on November fifth 1975?", to which he replied, "Yes", an answer that was scored as "false" because the show's polygraph eximiner determined that Walton had been "conclusively deceptive".

As would be expected, Walton and his fans have since attacked the show's process as unreliable, and because it's true that polygraphs aren't 100 percent foolproof, it's easy to put that kind of damage control into place. So let's set aside the issue of polygraph accuracy and look at what is provable. Walton stood to win up to $500,000 for his appearance on Moment of Truth. According to the show's host, Walton had still answered 14 other questions satisfactorily, which let him walk away with a tidy $25,000 despite his abduction claim being ruled false!

Over the decades, book reprints, movies, posters, interviews on UFO themed AM radio talk shows and Internet podcasts, plus countless retellings in ufology culture have sustained Walton's story. As of 2012, Walton was still signing books and making appearances at ufology conferences.

Then in 2014 Walton and his supporters organized The 1st Annual SkyFire Summit, a conference commemorating the Travis Walton UFO incident. Tickets to the event held in Sitgreaves National Forest, the location of the Walton's alleged abduction were priced between $20 and $275. So there is no doubt that the Fire In The Sky franchise has been successful. How much Walton and his crew have personally gained remains unclear, but it is reasonable to surmise that it has probably provided some modest returns over the years.

What is known for certain is that Travis was reported missing on November 5th, 1975 and an official search was performed. However no trace of Walton was found and he did not reappear until November 10th, 1975. In the meantime, five of the men who had been with Walton during the UFO sighting passed polygraph tests corroborating their account of seeing a UFO over the spot where Walton went missing. A polygraph test on the sixth member of the crew was inconclusive. Walton himself passed some tests and failed others.

Since then, neither Travis Walton nor the witnesses have recanted their story and no verifiable evidence has surfaced to prove the incident was a hoax. Ufologists have always been divided on the issue of the story's veracity. Although some ufologists ( mainly APRO members ) initially believed that the Walton abduction was genuine, those at CUFOS were of the opposite opinion. The controversy over this incident was also a contributing factor to the demise of APRO.

In more recent times, it has been reported on the Paracast that in-person Travis comes across as personable, genuine and intelligent. Those who are more critical prefer to examine the case in the context of what happened at the time. Either way, it should be noted that the crux of the case is one of credibility, and that while issues of credibility have a place in the believability of a story, it does not mean that someone with bad credibility cannot have a genuine experience. In other words, the Walton abduction could be a modern case of The Boy Who Cried Wolf. Without further evidence, whatever really happened to Walton during his period of missing time will remain a mystery.